The first sample of the instrument has been created by me in December 2013. It happened, to be honest, for the most part accidentally. Though, of course, I believe that nothing happens by accident at all.

In general, everything happened as the following: while experimenting with the creation of reed drums, I noticed an interesting acoustic effect. This effect was that when you play the instrument at the reed drum there appeare to be additional overtones. In the future, experimenting with this effect, I tried, using technological methods, to allocate the overtone and strengthen it.

In the end, I managed to do that – the overtone sounded as I initially wanted: it added to the sound lobe certain harmonious color.

This way was born an instrument that I called GUDA. The origin of the name of the instrument is very interesting I think. The name is basically composed of two words: “Gu” – is a hole on the bottom side of handpan and “da” – is an imitation of the sound of a hammer hitting metal.

It turned out, that there are a lot of meanings of this word: there is the Belarusian word “guda” [Gu:da]; in Ukrainian and Russian there are verbs sounding like “gude”[gu:de], and “gudet`”[gu:det] (to buzz).

Instrument’s name origin could be also connected with the name of the creator: the abbreviated capital letters of my name and surname – GUbarev D. A. (but due to innate modesty this theory of origin of the instruments name I put in the last place).

Whatever it was, but the set of all versions of name origin led to the decision to name the newly baked instrument Guda (GUDA). The name of a musical instrument is well documented and is a registered trademark.

For the first time I try to realize my dream and create a musical instrument. As a result, there appeared ‘hlyukofon’ (tongue drum), which was made of propane cylinder.

I extend my knowledge in materials, instruments` settings and nuances of production.

I am continuously experimenting with the process of instrument creation. I’m trying to use my own authoring developments (combining drum with ‘kalimba’) and methods of engraving. I begin to study handpans and try to move the principles of handpan settings on tongue drums. As a result of combining two instruments I manage to make the first big tongue drum and name it GUDA. Speaking of the title, I used the abbreviation of my surname and name. Finally I style the letters in the form of a cut reed on my instruments. Thus the authoring engraving has a unique look and a particular phonetic sound.

All the time is spent in developing and experimenting with brands and types of metal processing. While starting to allocate and configure overtones on the tongues I change the geometry of the tool several times. At that time I produce a model of the tool with built-in block that is able to process sound signals.

Further development of instruments involves a musician and my friend Andrey Letov, whose experience and advice strongly influence the further direction of work. Soon there appear new developments, such as a prototype hybrid-GUDA, GUDA-udu, two-way model and GUDA + 9 tongues. At this time I’m also starting to cooperate with the online store of musical instruments called Zen-Percussion, via which I start selling my tools. By that time I have already registered and received a certificate for the name GUDA and its logo.

I am not satisfied with the oxidation of metal and continuous painstaking care of the instrument, so I try to use stainless steel. This way the higher quality contemporary drum GUDA emerges.

While communicating with musicians, I have learned that the large size of the instrument becomes a problem while transportation and travelling. Considering those feedbacks, there appears an idea to transfer the experience and knowledge from development of bigger version of instrument to smaller one, aiming to develop it without loss of sound quality of the bigger size instrument. That’s how GUDA Freezbee model appears.

To the process of production of musical instruments GUDA Drum joins my friend and associate Victor.

I cease cooperation with Zen-Percussion. However, they continue without my permission to use my name and logo GUDA, persist on copying my instruments including design.

I introduce overtone setting on small instruments GUDA Freezbee and call them GUDA drum MINI Overtone model.
I have created improved GUDA drum Hybrid. It combinats cuted tongues and central ding like on the handpans.

I constantly continue the exploration of new materials and try to combine GUDA drums with other musical instruments. So I really hope that in the nearest future I will be able to please you with the new developments. 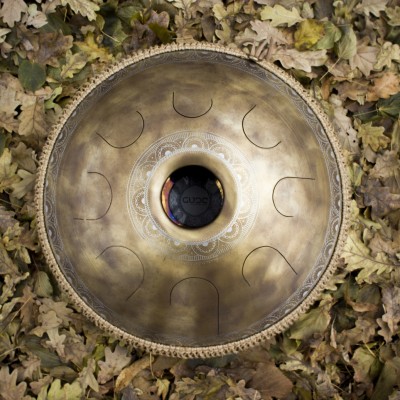 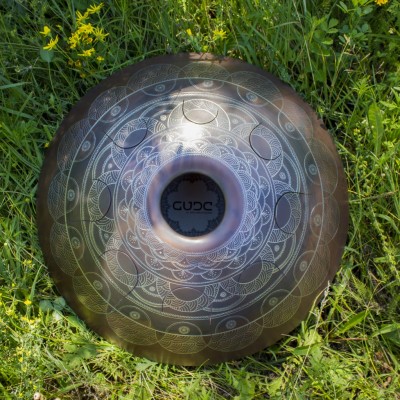 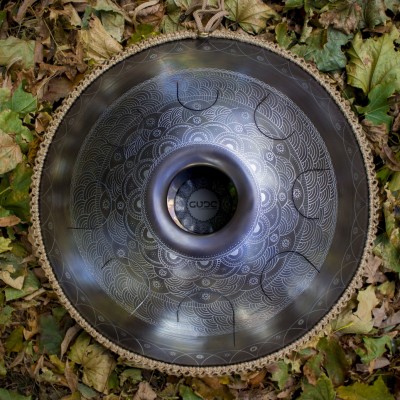 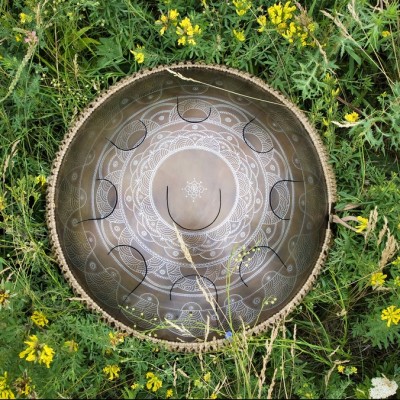 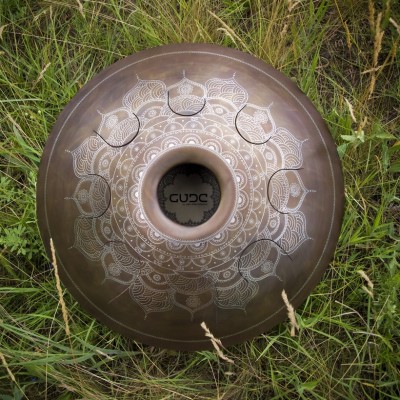